On June 4, 2021, two chicks of the Eastern Imperial Eagle hatched out in a nest monitored by an online camera. Watch live here. 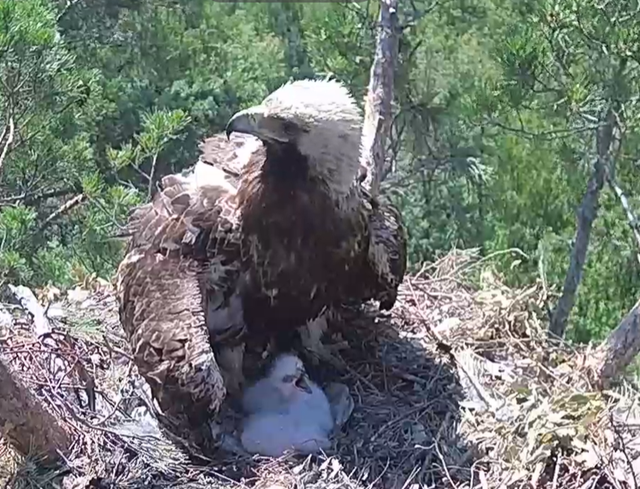 The Eastern Imperial Eagle is on the list of endangered species. For this reason, NABU has been researching the breeding and migration behavior of these birds of prey in the Ulyanovsk region (their natural distribution center) for already 10 years.

The population of the birds in Europe is estimated at 1,100 to 1,600 breeding pairs. So far, little is known about their behavior and threats in their wintering grounds and thus complex research programme is necessary in order to be able to protect the eagles.

The project "New networks for the Eastern Imperial Eagle" was started by NABU in the beginning of March 2021 in the Ulyanovsk region. In the first weeks, the contracts with the partners were concluded and the project structures and coordination were established. The project is implemented by NABU in cooperation with the Simbirian Regional Association of the Bird Conservation Union of Russia (RCBU) and Nature Conservation Center NABU-Kavkaz with financial support and funding from NABU International Foundation and VGP Foundation.

In the past years before the project, 9 Eastern Imperial Eagles (Sviyaga, Avralka, Timosha, Surah, Atmala, Kiryusha, Yarosha, Smolka, and Tashla) have been fitted with GPS transmitters in the frame of NABU’s work in Ulyanovsk. The tracking of these eagles will continue in the scope of this project and fitting of new transmitters will be performed later this year, when young eagles have reached the appropriate age.